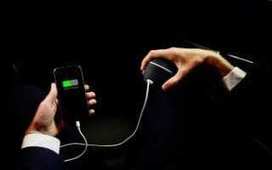 A 19 year old invented and developed a phone charger powered from the human body.

HandEnergy, the brainchild of Michael Vaga, 19-year-old inventor from Minsk, Belarus, charges your phone simply by rotating your hand, which activates the device’s gyroscope to produce energy that can then either be stored or used to immediately charge a mobile.

Michael Vaga said: “With each rotation of your hand, the rotor speed increases significantly and generates more power. The average speed of the rotor is 5,000rpm.

Sourced through Scoop.it from: www.telegraph.co.uk

This entry was posted in Scoop.it, Teens and tagged technology. Bookmark the permalink.